Two weekends ago, I turned some legs from green live oak for my Windsor chair. They turned out nicely, but the only problem is that I’ll have to wait at least a month – maybe two – before they’re dry enough to use. I’m the impatient type, so I began considering what my other options might be, and I decided to turn a set of baluster legs from some dry red maple that I can use in the meantime. Though it’s not the preferred wood for baluster legs, I’m convinced that the red maple will be plenty strong. The live oak legs can wait for my second chair.

I started with some 2″-thick maple planks and sawed out a set of 2″ x 2″ x 24″ legs blanks, being careful to follow the grain as I marked them out, rather than the edge of the boards. I popped the square blanks on the lathe and quickly roughed them to round.

The maple was absolutely delightful to work with after turning the live oak. Long, creamy ribbons of wood spilled from my gouge like strands of spaghetti. I didn’t think dry wood was supposed to turn this well! I never turned much maple since it’s so bland compared to more colorful woods. I didn’t know what I was missing! Compare the maple shavings on the left to the stiff, brittle shavings from the live oak:

The baluster legs required much more skill and attention than the simple bamboo turnings that I did previously. The first one took well over an hour from start to finish, and I still screwed a few things up. I’ll probably need to make a replacement. Nevertheless, it still turned out pretty nice. The second one went much more smoothly, and by the third, I was really in a groove.

I decided to time myself on the fourth leg, but by that time it was well past midnight and apparently my body was letting me know it was time for bed. I had trouble concentrating, had a few “Oops” moments, and the leg didn’t turn out quite as well as my second and third. I think it will still be fine to use, though. My time from start to finish was 25 minutes on the final leg. Elia Bizzarri says he’s able to turn a baluster leg in 10 minutes, so apparently I still need plenty of practice. I hear it gets easier after the first thousand or so.

Can you pick out which leg I’m planning to replace? The error is subtle… 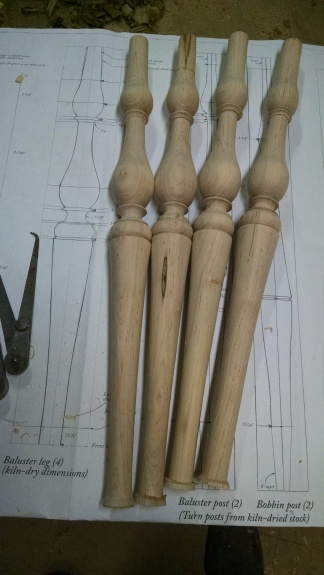 Edited to add: Kylie picked out the goofed-up blank. It’s actually not the mineral streaks that I dislike, though – the chair will be painted, so those won’t show. I turned the bead too narrow and the fillet above it too wide. I’m probably the only one who would ever notice, but the cat’s out of the bag, now. Here’s a closeup: