In my last post, I went through the process of designing a kitchen table that will actually fit in our kitchen and still allow room for two adults to walk around one another. The material that I selected for the table was some sassafras that I had milled about three years ago.

Sassafras is a gorgeous wood for hand tool woodworking. It works like a dream and smells like dessert. The sweet-spicy aroma has permeated my shop for a couple of weeks now. I had one wide slab 3″ thick, which I sawed up for the legs, and just enough clear 4/4 material to make the top.

At this point in the build, the legs are roughly planed and square. Since the half-lap joinery demands that the legs be at their finished dimension, I went ahead and made the final passes with my smoothing plane.

After planing to the finished size, the next step is to lay out the half-lap joinery. Curiously, to have the tops and bottoms of the legs fall along the same perimeter, you don’t cut the joints in the middle of the legs, but off-center by half the width of the legs. First, I mark out the proper width on the face with a try square and a marking knife.

Then I mark halfway through the legs along the edges with a marking gauge, and bring the marks from the face down with the saddle square. 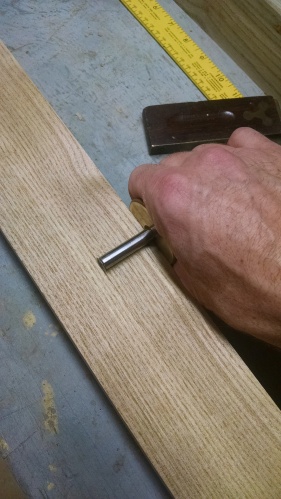 I deepen all of my scribed lines with a wide chisel  and pare out a chip to make a “track” for my saw to ride in. It’s like training wheels for your saw! 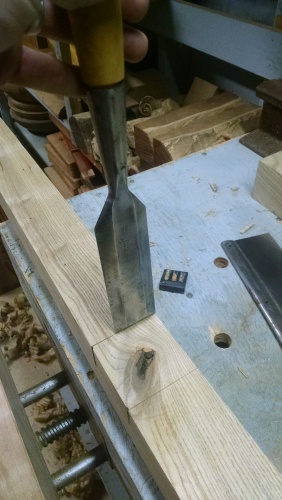 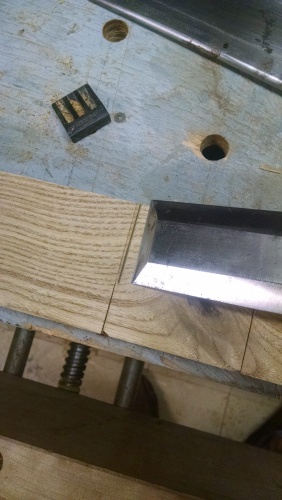 After defining the kerf with the chisel, it’s time to get sawing. I use a carcase saw to make the “money” cuts that define the edges of the half-lap, and a box store ryoba to make a few kerfs in the waste to make it easier to chisel out.

Some quick work with a chisel gets me close to the bottom. 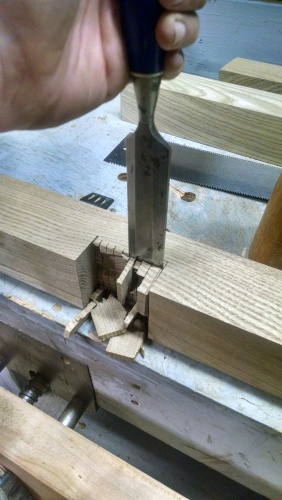 And then I dial that sucker in to perfection with a router plane. The router place can leave a surprisingly sweet surface if you just take a light shaving on the final pass. 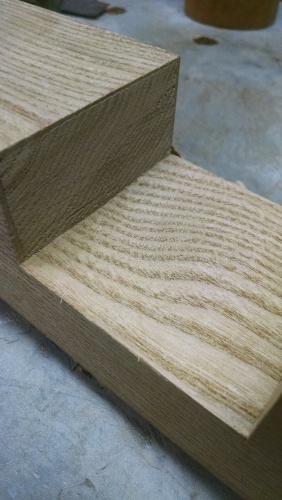 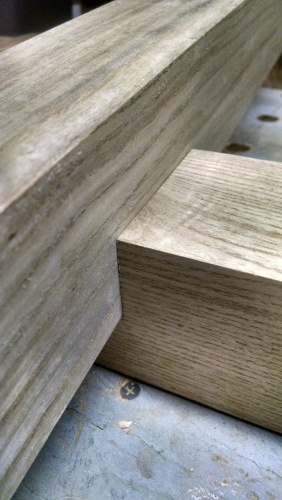 Three legs with the joinery complete. This was about as quick and painless as table joinery ever gets!

And the moment of truth: Will the legs go together the way my Sketchup model says they will?

I can’t complain about the fit of the joints, either.

Up next: Finishing up the top!

…to bring you a quick update on a project from the honey-do list.

My wife knows that I’m chomping at the bit to get started on Windsor chair, but she had a few requests before I get started. Numero Uno was to build a replacement for our kitchen table.

We like our kitchen table. It’s a big, beefy trestle table made from thick white pine. My grandmother bought it new in the 1960’s. It was well-built, but when I inherited it, the dark finish was gummy and depressing. I was too busy renovating a house to worry with fixing it. When my wife and I were married, one of her first requests (demands?) was to re-finish the table. We sanded it down to bare wood, painted the base with barn red milk paint, and oiled the top with linseed oil. We’ve shared many meals around this table over the last 5 years.

But, we now live in a small ranch house with a small kitchen, and the trestle table is 3′ wide and 6′ long. It’s just too big. A round table was requested, which should fit the space much better.

A table is a simple object. It can be built as quickly as you like, or you can dress it up with as much fancy joinery, carvings, or veneer as your imagination allows and it can take a year. For this project, my aim was workmanlike efficiency, but with a tolerable aesthetic appeal.

I love geometric puzzles, and the final photo had me imagining how the joint fit together. A few minutes in Sketchup confirmed my suspicion that the basic joint was just a simple half-lap. I quickly settled on this design for the base of my table. Even though I don’t find it as visually striking as the first joint, I like the elegant simplicity  of its engineering. Unlike the first joint, this one can be assembled from whole timbers, rather than cutting and gluing up at least one leg (but if anyone thinks they can demonstrate a way to create the first table’s base using whole timbers, well, good luck…)

One thing that became apparent from my work in Sketchup was that the height of the table directly impacts the diameter of the top. If you want your tabletop at 29″ high (a usual height for a dining table), then you’re going to have trouble making it  much less than 48″ in diameter (and even this requires truncating the legs, such that they have squared-off ends, rather than ends that follow the plane of the floor and tabletop. Hopefully the Sketchup drawings make it clear what I mean by this).

So, I’ve settled on 48″ for the diameter of the table, but if I find that this is still too big for the space, then I can probably shave another inch off the radius without too much trouble. A bit of work in Sketchup yielded this model: 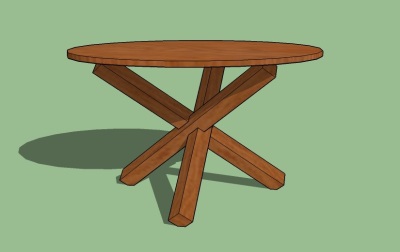 I can’t say that this is the prettiest or the most exciting thing I’ve ever built, but it meets the criteria that I had in mind when I originally set out to build this table: It’s visually interesting, expedient to build, and I already have the necessary materials on hand.