A couple weeks ago, I posted about making a new carving axe from an old carpenter’s hatchet. The axe has gotten quite a workout since I made it, and I couldn’t be happier with it. One curious feature of this old axe head is a couple of dimples on its right cheek. I’ve seen similar dimples, years ago, on the back of a chisel. I can’t remember who first told me about their purpose, but I suspect many of my readers already know.

One clue about their purpose lies in the form of a faint color change in the steel about 3/4″ from the cutting edge. This line demarcates the change between hardened steel and the softer steel. 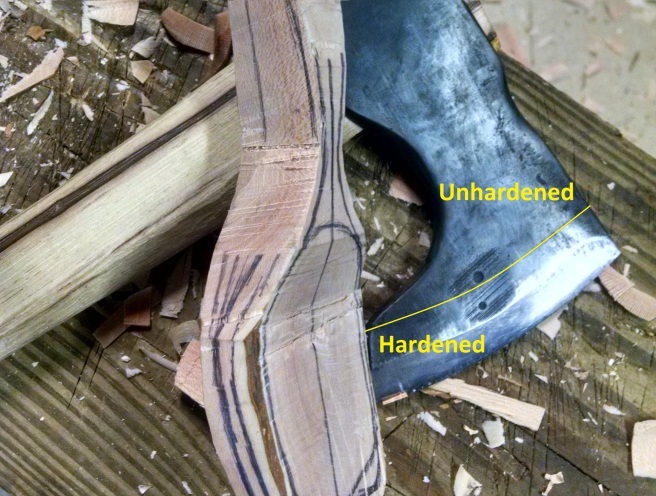 The hardened/unhardened steel combination is found in many tools, from chisels to knives to plane blades, but it serves an absolutely critical function in a striking tool such as an axe. The cutting edge must be quite hard to remain sharp after repeated blows into wood, but unfortunately there is a positive correlation between hardness and brittleness. If we made the entire axe head hard enough that the edge stays sharp, we also increase the likelihood that the blade will crack during use. On the other hand, if we make the steel soft enough that brittleness is not an issue, we also resign ourselves to a blade that will not hold an edge for more than a few minutes. The solution? Combine a soft but malleable steel body with a hard but brittle edge. The softer steel supports the harder steel to create a superior tool.

There are many ways to accomplish this task. Traditionally, a blacksmith would forge weld a piece of tool steel within a wrought iron sandwich to make an axe head. This works well and yields a robust blade, but it’s also labor intensive (and therefore expensive). The modern method is to forge the entire axe head of tool steel, then harden only the outer edge of the blade. This is the method that was used for my axe.

So what does this differential hardening have to do with the dimples on the axe cheeks?

Those dimples are the vestiges of hardness testing done by the manufacturer to confirm that the axe head was hardened to certain specifications. In modern parlance, we tend to refer to steel hardness on the Rockwell scale. The higher the number, the harder the steel. Chisels and plane blades may measure around 60-62 Rockwell hardness. Axes will be a bit softer to remove some of the brittleness – 55-57 is typical for a well-made axe. Saws are softer still, since they must be sharpened by a steel file, rather than a stone, and “set” (that is, the teeth bent by a specific amount to either side), which a harder steel would not allow. A hardness of 50-52 is normal for saw steel.

Hardness is measured by forcing a very hard object (often diamond or tungsten carbide) of a specific size and shape into the object to be tested using a specific amount of force. The size of the the depression that is created provides a measurement of the material’s hardness. In the case of my axe, the depressions indicate that the object used for testing was spheroid, which means that a Brinell hardness tester was used. The formula for determining harness using the Brinell test is: 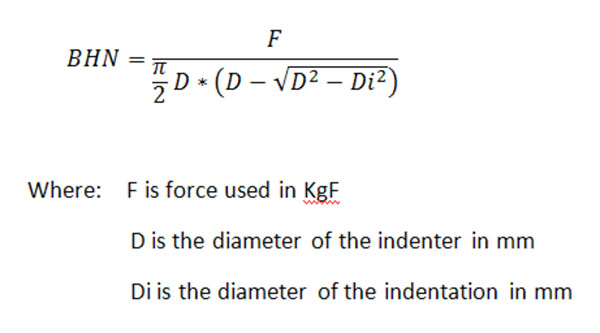 Which is a fancy way of saying: the smaller the indentation (Di), the harder the steel. So, looking again at the dimples in my cheek, we see exactly what we would expect. The dimple near the cutting edge is smaller (and therefore the steel is harder) than the dimple right behind it. It’s pretty intuitive, actually. Unfortunately, we don’t know the diameter of the indenter (D) or the force used by the test (F), so we can’t estimate the hardness using the information available to us, but still…Go science!

I can anectodally state that the steel in this axe head is quite good. I would assume that a manufacturer that cares enough to test its blades is probably more likely to be one that will make a good blade in the first place. So, do any of your cheeks have dimples?