Last summer, my wife and I took an all-too-short trip to Norway to attend the marriage of my wife’s high school friend Idun. Ten years prior, Idun spent a year in my wife’s hometown as an exchange student. The two became close friends during that year, remaining in touch ever since.

We had previously considered a trip to Norway to celebrate our own nuptials six years ago, but our meager finances at that time precluded such an extravagant excursion, and we happily booked week-long trip to Yosemite National Park instead. It turned out that delaying our trip was providential decision, because the once-in-a-lifetime opportunity to experience a traditional Norwegian wedding (as an invited guest, that is) was without a doubt the highlight of the trip.

The ceremony was held in the historic and imposing Fjære Church, just outside the city of Grimstad, where the bride and groom have lived their whole lives. The stone walls of the church date to ca. 1150. The church is impeccably maintained, as are most old Norwegian buildings, it seems. 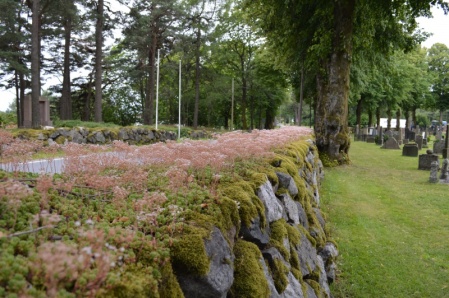 This stone wall appears to have been here for a while. 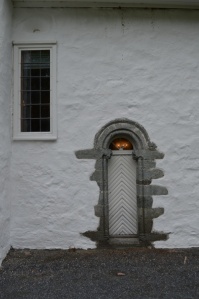 Rear entry. I love the imbalance of the quoins.

Rear of the church. The red clay roof tiles were ubiquitous on homes around Grimstad, while the wooden shingles were more typical of the stavkirkes that dot the inland of Norway.

Front view of the church.

Side entryway. Note the different patterns on the entablatures just below the arch.

I was particularly awestruck by the woodwork within the church. The work was completed discontinuously over several centuries. The balcony is dated 1708. The pulpit may be as old as 1500. The church contains two clocks, which date from 1660 and 1855. I would have loved to spent an entire afternoon poking around the church, but of course, I was there to celebrate a marriage and not to ogle ancient woodwork. Propriety (and by “propriety”, I mean “my wife”) compelled me to restrain myself, so most of my pictures of the interior were snapped hastily and/or surreptitiously.

Looking into the sanctuary. Impressive Gothic arches at the rear.

The highly ornate pulpit is variously dated from 1500-1700 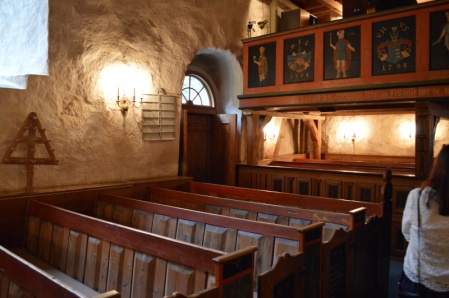 The joined pews should be very familiar to Peter Follansbee.

I liked the marbled paint on the upper column and the ogee treatment at the ends of the beams. 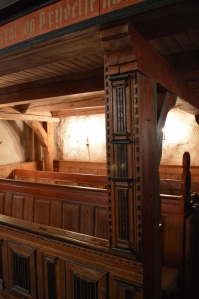 Attractive carving on this column. The attention to detail is impressive. 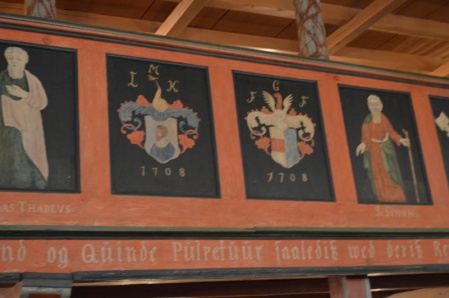 The balcony is helpfully dated 1708.

The couple has friends from all over the world, and the wedding was very much an international affair. Guests were encouraged to wear wedding garb that would be traditional to their nationality. We intermingled with Scotsmen in plaid kilts, Arabians in bisht, Portuguese in their finest livery, and I (being a Southerner) wore my blue seersucker suit. Most of the guests were, of course, Norwegian, dressed in their quaint bunader, and the bride herself donned the customary silver crown. According to the bride’s estimation, perhaps only one in five Norwegian couples get married in their traditional dress – the common Western white-gown-and-tuxedo weddings are presently far more popular. I was happy to see that our friends chose the traditional route. It certainly made for a richer experience for their many foreign guests.

The wedding ceremony itself was simply beautiful. I can think of no better word to describe it. The bridal procession was led, as tradition dictates, by a fiddler playing the Hardingfele, a variant of the violin peculiar to the southwestern part of Norway. The Hardingele is unique in that it has eight or nine strings, rather than the four strings of the familiar violin, and thinner wood. Four of the strings are strung and played normally, while the other four or five are understrings that resonate under the influence of the primary strings. The result is a haunting and emotional tone that is quite distinct from a normal violin.

I could go on with some prolixity about the wedding, and especially the reception, which was one of the most enjoyable that I’ve attended, but I suspect that it was a bit of a you-had-to-be-there event. Instead, I’ll leave you with this 60-year-old video of a rural Norwegian wedding that seemed familiar, though decidedly more stodgy than the convivial affair that we attended:

Some highlights from the video: