A couple of weekends ago, I had a minor incident while hollowing out a large shrink pot. (What’s a shrink pot, you ask? Luckily Dave Fisher covered that topic a couple of weeks ago – click here). I thought I was being clever by using a chunk of maple too knotty for spoons or kuksas for my shrink pot. Turned out to be a costly error. I got one of my favorite gouges stuck in a knot, and it shattered as I was trying to persuade it loose. 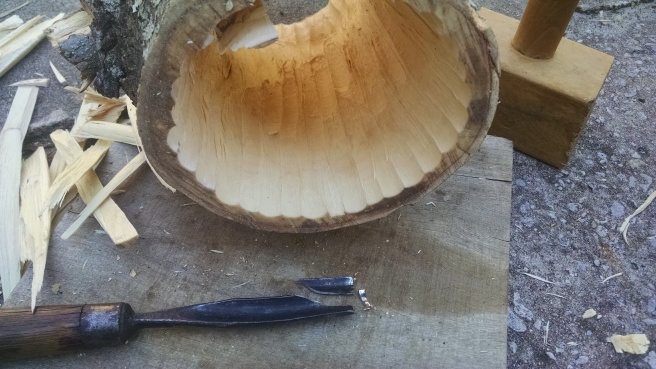 The gouge was a vintage Swan that I picked up for $5 at an antique store in Louisiana. Hard to replace (at least for that price).  I determined that there was enough steel left to grind it down and put it back into service.

The tricky part here is trying to cut down to good steel without getting the blade too hot and ruining the temper. I took a hint from a blacksmith friend and stuck the gouge through a potato to just below the lowest point of the break. 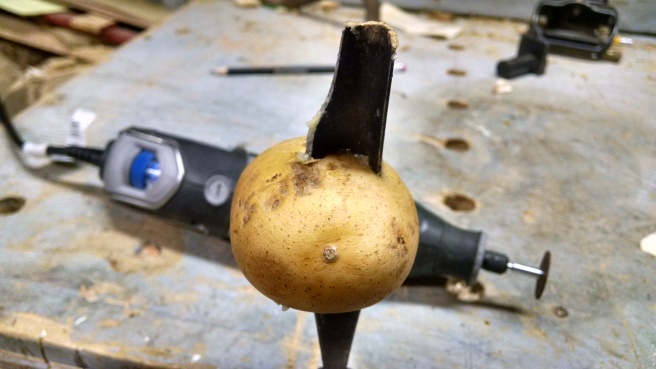 The potato acts as a heat sink, so you can grind as needed without getting the steel too hot. I used a cutoff wheel on my Dremel to cut off the bulk of the waste, and the potato worked as advertised – the steel never even got hot to the touch. 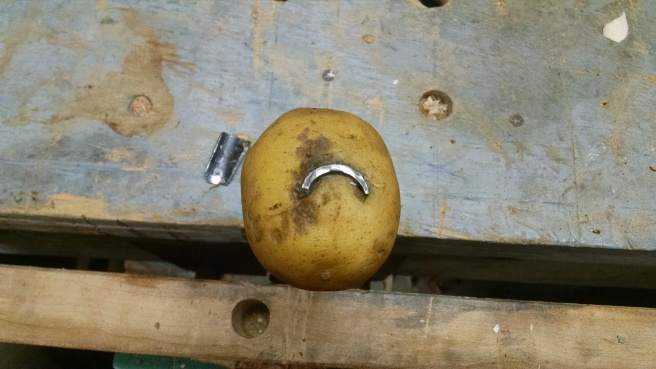 Of course, I still had to reshape the bevel at this point. I do this with a deft tough on the grinder. I prefer an 80-grit white Norton stone for this task. It runs considerably cooler than the cheap hardware-store gray stones. I also prefer to do the final shaping on the side of the stone rather than the face. This allows me to get either a flat or slightly convex bevel. I find that a concave bevel is counterproductive on a carving gouge. It tends to cause the tool to dive into the wood uncontrollably. A slightly convex bevel helps the tool slice into and out of the wood. 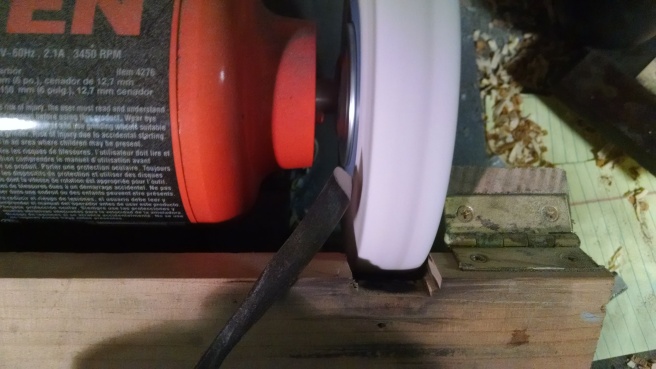 A steady hand and a gentle rolling of the gouge against the side of the wheel produces a neat bevel that requires very little finishing work with stones and a strop.

The inside of the gouge required some attention as well. This old tool had a fine layer of surface rust and some minor pitting to go with it. To remove the pitting, I first turned a small hardwood dowel, slightly smaller than the inside diameter of the gouge, and cut a small kerf along the length. Chuck the dowel into a cordless drill. Slip a narrow strip of 220-grit sandpaper into the kerf and wrap it around the dowel. A bit of masking tape helps hold it in place. Now you can use your custom “stone” to hone the inside of the bevel and clean up the pitting. 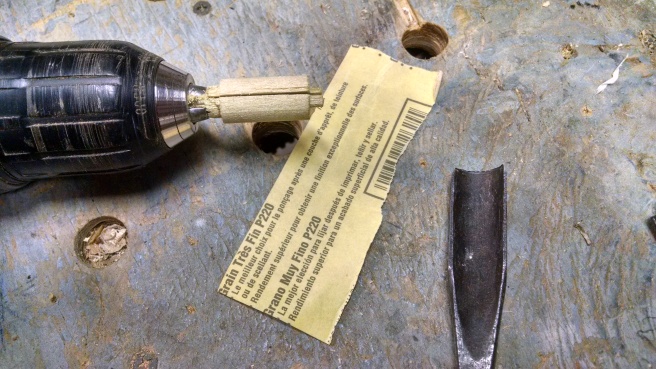 I find it easiest to hold the gouge in a vise, using two hands to guide the drill. It can get away from you if you’re not careful, but a nicely polished interior is your reward. You can quickly buff the edge to a perfect shine by charging the dowel itself with honing compound and power stropping. 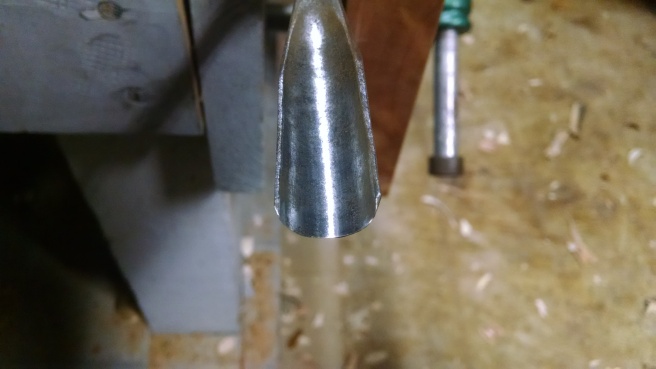 I now have a functional gouge once more – but I will admit it doesn’t have quite the same balance after losing more than an inch of its length. Time will tell how much use this gouge will see in the future.

2 thoughts on “I Split Off More Than I Could Hew”