The pegged mortise-and-tenon: my favorite joint in woodworking. And not just any pegged mortise-and-tenon. When reasonable, I prefer to drawbore my joints as well. If you aren’t familiar with drawboring, then best to head straight to the expert himself: Peter Follansbee. This post is just as excellent today as it was when he wrote it seven years ago. And drawboring is just as effective today as it was 400 years ago.

What I’d like to talk about today, though, is a very specific part of the joint: the pegs (or pins). For a while, drawboring gave me fits every time I tried it. It seemed like 1 in 4 joints was a failure – either the peg would fail to snake its way through the offset and end up breaking, or the face of the mortised piece would crack as the peg was getting seated.

I couldn’t figure out was I was doing wrong. Too much offset in my holes? Were the pins too big? As it turned out, the problem was indeed my pins, but not so much the size as the shape.

Here’s a picture of the very first piece where I used pegged mortise-and-tenons. It’s a Shaker-style cherry table that I made in 2007, I think. Not drawbored – the joint was glued up, clamped together, then I bored through the joints and drove the pegs. For this piece, I simply grabbed some offcuts of cherry and turned them to dowels 1/4″ in diameter. Worked fine for this piece – there was no offset to snake through, so the pins went home without any fuss. But unbeknownst to me, this technique was the beginning of all of my drawboring woes.

Fast-forward to 2011. I was building a queen-size Arts-and-Crafts bed for my wife. The rails were 5′ long – a foot longer than my clamps. It was the perfect opportunity to try a bit of drawboring, since the pegs will pull the joints tight, rather than relying on clamps. I resorted to the method that I had used many times before for pegged joints. I grabbed some offcuts of white oak, split them to get straight-grained pieces, and turned them to size on my lathe. I even gave the ends a really good taper to help the pegs find their way through the offset.

What a nightmare. I think I busted two of the pegs completely as I was trying to drive them home. There was nothing I could do but watch helplessly that the oak shattered underneath my hammer. Luckily, the joints were pretty tight already, and made to tolerances that allowed the glue to hold the joints together without relying upon the pegs, but it was still painful to watch after hours of careful preparation.

You can still see just a bit of damage to the peg in the photo above that did’t quite disappear when I pared it flush. Luckily, this is all the evidence that remains of that failure.

I tried a few more methods after that. I shaved some straight, octagonal pegs, rather than round ones. No dice. I tried reducing the offset of my drawbores to a mere 1/16″. That works, but the joints don’t always pull as tightly as you would like. Finally, I stumbled upon Peter Follansbee’s work and the scales fell from my eyes. As it turns out, the root of my problems was the taper of my pegs.

I had been working with what were essentially straight pegs, with just a small taper at the tip – basically sharpened like a pencil. The problem with this shape is that the peg doesn’t get a chance to snake its way all the way through the tenon before the peg hole fills up and meets strong resistance. It occasionally ends up being too much resistance to overcome, and the pegs shatter before they can be driven down tight.

The solution? Instead of a short, blunt taper at the tip, now I use a taper that continues the entire length of the pegs. Like these: 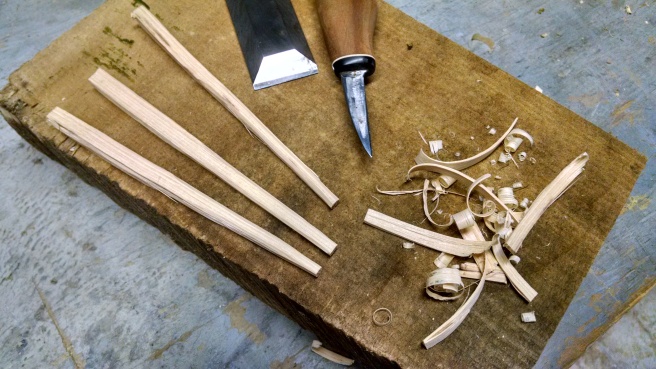 For a 5/16″ peg hole, these pegs start off at maybe 3/16″ at the tip and taper gently to a bit over 5/16″ at the butt. They’re more or less octagonal in cross-section, gradually changing to a square at the butt, but I’ve found that the cross-section matters less than getting the taper right. They can’t be too big a the tip or you’re asking for a failure.

I should mention, too, that riven wood is absolutely critical. Don’t try to do this with a store-bought dowel. Keep some dry offcuts of oak, hickory, ash, or sugar maple. Split out what you need. I like a peg about 5″ long – enough to handle easily while I’m shaving them. I use a sharp chisel to get a square taper, and then cut the corners off with a knife. You can do the whole thing with a chisel if you want.

Get it started with the pinhole over a doghole, or hanging off the edge of your bench. These pegs need to go all the way through.

Stop driving when you meet strong resistance. You can feel and hear the difference when these pegs are fully seated. 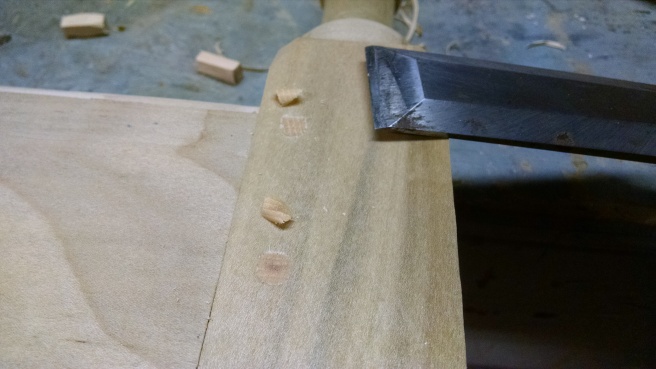 Then cut the pegs close to the surface with a backsaw – careful not to mar the surface – and pare them flush with a wide chisel.

There were 20 drawbored mortise-and-tenons in this table frame – and not a single failure. My success rate has improved tremendously since I started making proper pegs.

One thought on “I’ve Got You Pegged.”