My friend Jessica won last week’s spoon drawing. She is from just across the state line in St. Mary’s, GA, so rather than shipping the spoon, she offered to come pick it up. She and her husband Josh are cool people and we don’t hang out with them often enough, so we just made plans to spend the whole day with them instead.

Saturday morning, we went to “Pioneer Day” at the Okefenokee Swamp. They had a blacksmith, a spinner, a bowyer, a cane-grinder, and a cane syrup boil. My daughter especially enjoyed feeding sugar cane into the cane grinder. What kid wouldn’t love that? I enjoyed talking to the bowyer. His bows are made from Osage-orange, which wouldn’t have been the traditional wood for natives in Southeast Georgia, but he was from Arkansas, so it made sense for him. He even had a quiver of arrows made from riven white ash and turkey feather fletching. I’m not much of a hunter, but it was cool stuff. 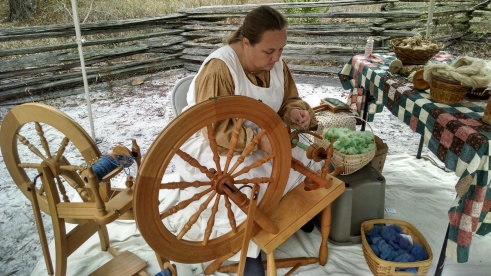 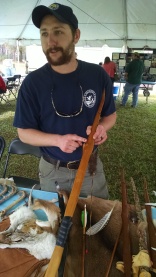 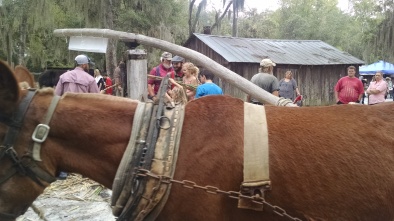 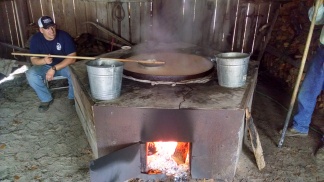 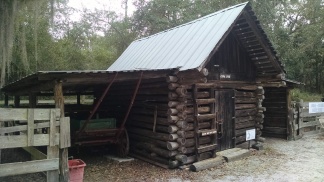 I enjoyed the old Chesser Island Homestead. I remember going there as a child and admiring the log cabins and the roughsawn planks of the farmhouse. This time, I took notice of the furniture in the house. There were scads of ladderbacks, many of them in various stages of disrepair. A couple of them were quite nice, though. The chair on the left (below) had a seat of white oak splints, a material which – along with hickory bark seats – seems to get plenty of attention these days from books and modern chairmakers.

Honestly, though, the buckskin seat (in the middle) is as typical a seating material as any for old ladderbacks. Those things were all over antique shops in South Mississippi, and there were at least two of them in the Chesser farmhouse. Never seems to get mentioned much in woodworking books, though, presumably because it doesn’t come from a tree.

I also couldn’t help but snap a photo of the one Windsor chair in the house, a factory-made chair with a shapeless seat and stocky bamboo turnings. Yeah, it’s ugly. Much easier to make an ugly Windsor chair than a pretty one. Helpful to look at the bad ones too, though, if you aim to make a good one. 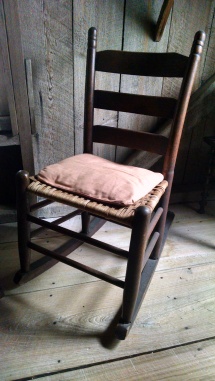 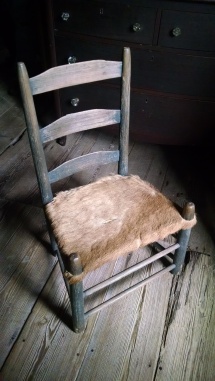 After we left the Pioneer Day festival, we all headed back to our home for some barbecued chicken (cooked over live oak and maple scraps, of course). I gave Josh and Jessica a tour of the workshop and we talked at length about the Windsor chair build. I know most people probably don’t even know what “Windsor chair” is, and even fewer (okay, many, many fewer) are as obsessed about them as I am. I must have gotten a little starry-eyed, because at one point Jessica asked, “So, why Windsor chairs? What’s so special about them?”

There are a lot of good answers to that question. Indeed, I’ve written about it before. but that night my answer was this: Windsor chairs are the only furniture form that I know of that can’t be improved in any way with power tools.

Sure, there are points in the process where you could introduce a power tool to gain some speed, but almost without exception, you will be giving up quality. The legs cannot be replicated by a machine with the same crispness as a hand-turned leg. A machine can make them all identical, but they will all be identically inferior. The seat cannot be shaped to the same organic look with a router or even a CNC machine. The spindles cannot not be shaved to precisely follow the grain – and therefore to perfectly preserve their strength – without the wedge, the froe, and the drawknife. Even the snugness and precision of the joints cannot be replicated without the continuous measurement and correction of the hand-made process. Joints are made to fit one another, not a plan a set forth by an industrial designer.

Last night, Peter Follansbee shared a link where master chairmaker Curtis Buchanan says it better than I ever could. You might as well listen to the guy who has made a few thousand chairs, rather than some dude who is halfway through his first:

Nothing’s like using the tools. Nothing. If I couldn’t make the chairs using these tools then I would find something else to make with these tools…

I could spend the next 30 years making continuous-arms and comb-backs and being completely content. And I think contentedness is very underrated. To me it’s a goal to be content, to be very content, just doing that same thing over and over and over again, which might sound boring to some people, but not to me at all. It’s just a lovely thing to come down here and do, day in and day out.

Click here to listen to the whole interview. It might just be the best 10 minutes of your day:

2 thoughts on “Why Windsor Chairs?”